Here are photos from our recent trip to Gaziantep.

You may visit the Gallery Link. The first 2 items are the most precious pieces. First one is “Mars”, Roman’s war God, and the second one is? the “Gypsy Girl” . The Mars statue found in Zeugma is probably one of the best versions ever known. The eyes are made from silver with surrounding gold, while the main statue is bronze. 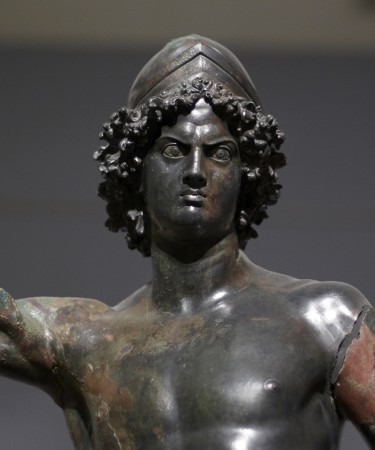 Information about “Mars” taken from Wikipedia:

Mars was the Roman god of war, the son of Juno and Jupiter, husband of Bellona, and the lover of Venus. He was the most prominent of the military gods that were worshipped by the Roman legions. The martial Romans considered him second in importance only to Jupiter (their main god). His festivals were held in March (named for him) and October. As the word Mars has no Indo-European derivation, it is most likely the Latinised form of the agricultural Etruscan god Maris. Initially Mars was a Roman god of fertility and vegetation and a protector of cattle, fields and boundaries and farmers. In the second century BC, the conservative Cato the Elder advised “For your cattle, for them to be healthy, make this sacrifice to Mars Silvanus you must make this sacrifice each year”.[1] Mars later became associated with battle as the growing Roman Empire began to expand, and he came to be identified with the Greek god Ares. Unlike his Greek counterpart, Mars was generally revered and rivaled Jupiter as the most honoured god. He was also the tutelary god of the city of Rome. As he was regarded as the legendary father of Rome’s founder, Romulus, it was believed that all Romans were descendants of Mars. 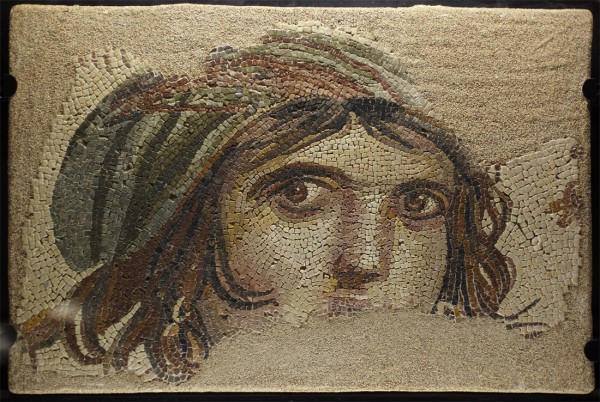 And the photo on the right is the famous “Gypsy Girl”, a small piece of the mosaic from Zeugma.

Also some genaral information about Zeugma:

The ancient city of Zeugma was originally founded as a Greek settlement by Seleucus I Nicator, one of the generals of Alexander the Great, in 300 BC. King Seleucus almost certainly named the city Seleucia after himself; whether this city is, or can be, the city known as Seleucia on the Euphrates or Seleucia at the Zeugma is disputed. The population in the city at its peak was approximately 80,000.

In 64 BC Zeugma was conquered and ruled by the Roman Empire and with this shift the name of the city was changed into Zeugma, meaning “bridge-passage” or “bridge of boats”. During Roman rule, the city became one of the attractions in the region, due to its commercial potential originating from its geo-strategic location because the city was on the Silk Road connecting Antioch to China with a quay or pontoon bridge across the river Euphrates which was the border with the Persian Empire until the late 2nd century.

In 256, Zeugma experienced an invasion and it was fully destroyed by the Sassanid king, Shapur I. The invasion was so dramatic that Zeugma was not able to recover for a long time. To make the situation even worse, a violent earthquake buried the city beneath rubble. Indeed, the city never regained the prosperity once achieved during the Roman rule.

Zeugma and environs remained part of the Roman empire. During the 5th and 6th centuries the city was ruled by the Early Byzantium or Eastern Roman Empire. As a result of the ongoing Arab raids the city was abandoned once again. Later on, in the 10th and 12th centuries a small Abbasid residence settled in Zeugma.

Finally a village called Belkis was founded in the 17th century.

This entry was posted in Uncategorized and tagged belkis, gypsy, mars, turkey, zeugma. Bookmark the permalink.