Urfa is located in the south-eastern part of Turkey.

The photos are from the legendary lake of Sacred Fish (Baliklig?l) where Abraham was thrown into the fire by Nimrod. According to the myth, the fire became the lake, and the wood became the fish. Follow the link for the Gallery.

The pool is in the courtyard of the mosque of Halil-ur-Rahman, built by the Ayyubids in 1211 and now surrounded by attractive gardens. The fish are fed by the visitors, who make wishes.? The courtyard is very peaceful and it is said that if you see a white fish you will go to heaven.

The history of ?anl?urfa is recorded from the 4th century BC, but may date back to the 12th century BC, when there is ample evidence for the surrounding sites at Duru, Harran and Nevali Cori.[2] It was one of several cities in the Euphrates-Tigris basin, the cradle of the Mesopotamian civilization. According to Turkish Muslim traditions Urfa (its name since Byzantine days) is the biblical city of Ur, due to its proximity to the biblical village of Harran. However, some historians and archaeologists claim the city of Ur in southern Iraq. Urfa is also known as the birthplace of Job.
In the aftermath of the First Crusade, the city was the center of the Crusader County of Edessa, until 1144, when it was again captured by the Turk Zengui. For the ten years following the Turkish capture, Urfa was at the center of European history, since the very reason for which the Second Crusade was launched was the city’s recapture. While it began with an enthusiastic massacre of Jews in western Europe and the presence of an Emperor and a King of France gave it much lustre, it was a disaster, its only success recorded resulting from auxiliary operation when an English fleet took from the Arabs and passed into the hands of the future King of Portugal the city of Lisbon.[3]

Under the Ottomans Urfa was a centre of trade in cotton, leather, and jewellery.

Modern ?anl?urfa presents stark contrasts between its old and new quarters. The old town is one of the most evocative and romantic in Turkey, with an ancient bazaar still visited by local people to buy fruit and vegetables. Much of the old town consists of traditional Middle Eastern houses built around courtyards, invisible from the dusty streets, many of which are impassable to motor vehicles.
?anl?urfa’s newer districts meanwhile, are a sprawl of modern concrete apartment blocks, with many surprisingly tidy leafy avenues, containing modern restaurants, sports facilities and other amenities with air-conditioning, a refuge from the roasting summer heat.

Another photo from the lake under the evening mist: 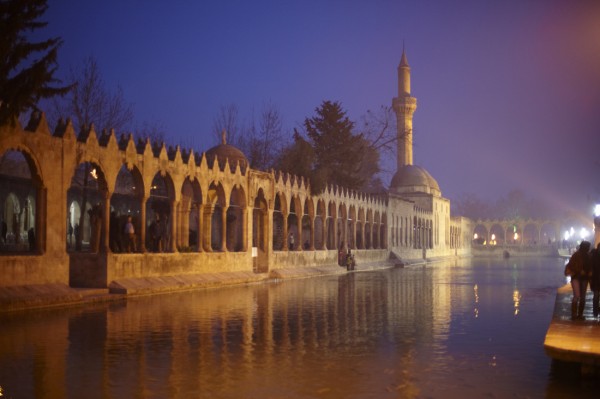 This entry was posted in Uncategorized and tagged fish, lake, sacred, urfa. Bookmark the permalink.