Iznik, a capital for many civilizations

A small town in Turkey, located on the ?znik lake, close to Bursa. No one would guess that this town was the capital of many civilizations, or that it was one of the early centers of Christianity.

Please follow this link to the gallery for more photos from Iznik. 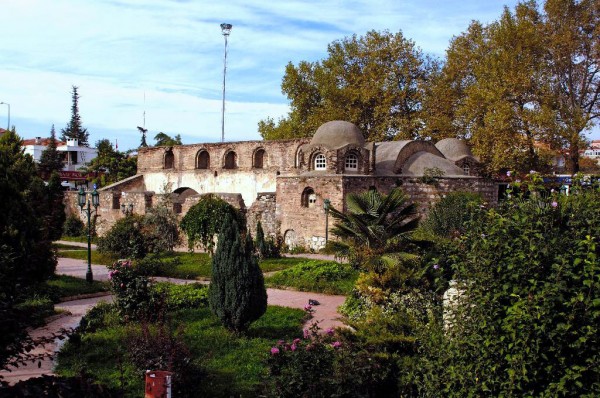 ?znik (which derives from the former Greek name ??????, Nicaea) is a city in Turkey which is primarily known as the site of the First and Second Councils of Nicaea, the first and seventh Ecumenical councils in the early history of the Christian church, the Nicene Creed, and as the capital city of the Empire of Nicaea. It served as the interim capital city of the Byzantine Empire between 1204 and 1261, following the Fourth Crusade in 1204, until the recapture of Constantinople by the Byzantines in 1261.

The city lies in a fertile basin at the eastern end of Lake ?znik, bounded by ranges of hills to the north and south. It is situated with its west wall rising from the lake itself, providing both protection from siege from that direction, as well as a source of supplies which would be difficult to cut off. The lake is large enough that it cannot be blockaded from the land easily, and the city was large enough to make any attempt to reach the harbour from shore-based siege weapons very difficult.

The city is surrounded on all sides by 5 km (3 mi) of walls about 10 m (33 ft) high. These are in turn surrounded by a double ditch on the land portions, and also include over 100 towers in various locations. Large gates on the three landbound sides of the walls provide the only entrance to the city.

Today the walls are pierced in many places for roads, but much of the early work survives and as a result it is a major tourist destination. The town has a population of about 15,000. It has been a district center of Bursa Province since 1930. It was in the district of Kocaeli between 1923-1927 and was a township of Yeni?ehir (bounded to Bilecik before 1926) district between 1927-1930. 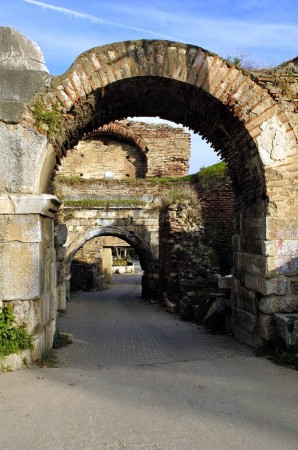 The place is said to have been colonized by Bottiaeans, and to have originally borne the name of Ancore (Steph. B. s. v.) or Helicore (Geogr. Min. p. 40, ed. Hudson); but it was subsequently destroyed by the Mysians. A few years after the death of Alexander the Great, Macedonian king Antigonus ? who had taken control of much of Asia Minor upon the death of Alexander (under whom Antigonus had served as a general) ? probably after his victory over Eumenes, in 316 BC, rebuilt the town, and called it, after himself, Antigoneia (Greek: ??????????). (Steph. B. l. c.; Eustath. ad Horn. II. ii. 863) Several other of Alexander’s generals (known together as the Diadochi (Latin; original Greek ????????/Diadokhoi “successors”)) later conspired to remove Antigonus, and after defeating him the area was given to Thessalian general Lysimachus (Lysimakhos) (circa 355 BC-281 BC) in 301 BC as his share of the lands. He renamed it Nicaea (Greek: ??????, also transliterated as Nikaia or Nic?a; see also List of traditional Greek place names), in tribute to his wife Nicaea, a daughter of Antipater. (Steph. B., Eustath., Strab., ll. cc.) According to another account (Memnon, ap. Phot. Cod. 224. p. 233, ed. Bekker), Nicaea was founded by men from Nicaea near Thermopylae, who had served in the army of Alexander the Great. The town was built with great regularity, in the form of a square, measuring 16 stadia in circumference; it had four gates, and all its streets intersected one another at right angles, so that from a monument in the centre all the four gates could be seen. (Strabo xii. pp. 565 et seq.) This monument stood in the gymnasium, which was destroyed by fire, but was restored with increased magnificence by the younger Pliny (Epist. x. 48), when he was governor of Bithynia.

Palace of Diocletian in Nicomedia circa 300 AD.

The city was built on an important crossroads between Galatia and Phrygia, and thus saw steady trade. Soon after the time of Lysimachus, Nicaea became a city of great importance, and the kings of Bithynia, whose era begins in 288 BC with Zipoetes, often resided at Nicaea. It has already been mentioned that in the time of Strabo it is called the metropolis of Bithynia, an honour which is also assigned to it on some coins, though in later times it was enjoyed by Nicomedia. The two cities, in fact, kept up a long and vehement dispute about the precedence, and the 38th oration of Dio Chrysostomus was expressly composed to settle the dispute. From this oration, it appears that Nicomedia alone had a right to the title of metropolis, but both were the first cities of the country.

The theatre, restored by Pliny, but now fallen once again into dilapidation.

The younger Pliny makes frequent mention of Nicaea and its public buildings, which he undertook to restore when governor of Bithynia. (Epist. x. 40, 48, etc.) It was the birthplace of the astronomer Hipparchus (ca. 194 BC), the mathematician and astronomer Sporus (ca. 240) and the historian Dio Cassius (ca. 165).[1] It was the death-place of the comedian Philistion. The numerous coins of Nicaea which still exist attest the interest taken in the city by the emperors, as well as its attachment to the rulers; many of them commemorate great festivals celebrated there in honour of gods and emperors, as Olympia, Isthmia, Dionysia, Pythia, Commodia, Severia, Philadelphia, etc. Throughout the imperial period, Nicaea remained an important town; for its situation was particularly favourable, being only 40 km (25 mi) distant from Prusa (Pliny v. 32), and 70 km (43 mi) from Constantinople. (It. Ant. p. 141.) When Constantinople became the capital of the Eastern Empire, Nicaea did not lose in importance; for its present walls, which were erected during the last period of the Empire, enclose a much greater space than that ascribed to the place in the time of Strabo. Much of the existing architecture and defensive works date to this time, early 300s. 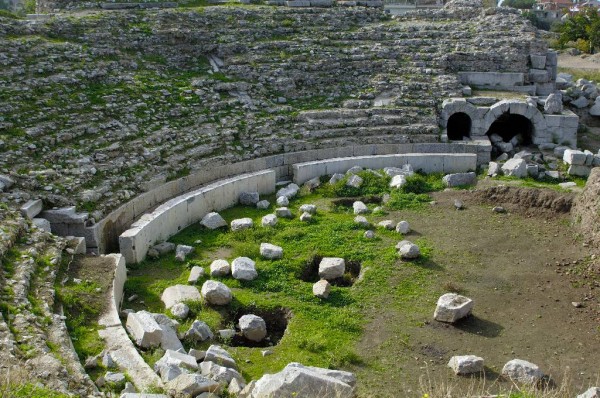 Nicaea suffered much from earthquakes in 358, 362 and 368; after the last of which, it was restored by the emperor Valens. During the Middle Ages it was for a long time a strong bulwark of the Byzantine emperors.
Nicaea in early Christianity

In the reign of Constantine, 325, the celebrated First Council of Nicaea was held there against the Arian heresy, and the prelates there defined more clearly the concept of the Trinity and drew up the Nicene Creed. The doctrine of the Trinity was finalized at the Council of Constantinople in 381 AD which expressly included the Holy Ghost as equal to the Father and the Son. The first Nicene Council was probably held in what would become the now ruined mosque of Orchan. The church of Hagia Sophia was built by Justinian I in the middle of the city in the 6th century (modelled after the larger Hagia Sophia in Constantinople), and it was there that the Second Council of Nicaea met in 787 to discuss the issues of iconography.

The city saw a long period of peace under Byzantine rule, which lasted until the rise of the Seljuk Turks. In 1077 they took the city, which changed hands several times in the next year until it was firmly in their control by 1078. Here they formed their capital. This event was instrumental in starting the First Crusade at Byzantium’s request in 1095, and armies from Europe along with smaller units from Byzantium converged on the city in 1097. After the European armies laid siege to the city and penetrated the walls, they were surprised to awake the next morning to see the Greek flags of Emperor Alexios I Komnenos flying over the city. Robbed of their chance to plunder the city, the crusaders and Byzantines were soon at odds. In the peace which was afterwards concluded the city was ceded to the Byzantines.

The twelfth century saw a period of relative stability and prosperity at Nicaea. The Komnenian emperors Alexios, John and Manuel campaigned extensively to strengthen the Byzantine presence in Asia Minor. Major fortifications were constructed across the region, especially by John and Manuel, which helped to protect the city and its fertile hinterland. There were also several military bases and colonies in the area, for example the one at Rhyndakos in Bithynia, where the emperor John spent a year training his troops in preparation for campaigns in southern Asia Minor.

Constantinople later fell in 1204 to the European armies in the Fourth Crusade, who set up the Latin Empire of Constantinople. They had poor control over the area, and a number of Byzantine successor states sprang up as well, including Epirus and Trebizond. However it was Nicaea that formed the core of the successor Byzantine Empire after Theodore Lascaris (who became Theodore I) founded the Empire of Nicaea (western Asia Minor) there. Building on the strong military infrastructure built up in the area over the last century, Theodore I and his successors slowly expanded their domains, and in 1259 Michael VIII Palaeologus usurped the throne. He captured Constantinople from the Latins in 1261, and restored the Byzantine Empire.

In 1331, the city was conquered and incorporated into the Ottoman Empire by Orhan I. With the fall of Constantinople in 1453, the town lost an important degree of its importance, but later became a major center with the creation of a local fa?ence pottery-making industry in the 17th century (known as the ?znik ?ini, ?in meaning China in ? Chinese porcelain stood in great favour with the Sultans.) ?znik tiles were used to decorate many of the mosques in Istanbul designed by Sinan. However, this industry also moved to Istanbul, and ?znik became a mainly agricultural minor town in the area when a major railway bypassed it in the 19th century. Currently the style of pottery referred to as the ?znik ?ini is to some extent produced locally, but mainly in K?tahya, where the quality ? which was in decline ? has been restored to its former glory.

The ancient walls, with their towers and gates, are in relatively good preservation. Their circumference is 3,100 m (10,171 ft), being at the base from 5 to 7 m (16 to 23 ft) in thickness, and from 10 to 13 m (33 to 43 ft) in height; they contain four large and two small gates. In most places they are formed of alternate courses of Roman tiles and large square stones, joined by a cement of great thickness. In some places columns and other architectural fragments from the ruins of more ancient edifices have been inserted. As with those of Constantinople, the walls seem to have been built in the 4th century. Some of the towers have Greek inscriptions. The ruins of mosques, baths, and houses, dispersed among the gardens and apartment buildings that now occupy a great part of the space within the Roman and Byzantine fortifications, show that the Ottoman era town center, though now less considerable, was once a place of importance; but it never was as large as the Byzantine city. It seems to have been almost entirely constructed of the remains of the Byzantine era Nicaea, the walls of the ruined mosques and baths being full of the fragments of ancient Greek, Roman and Byzantine temples and churches. In the northwestern parts of the town, two moles extend into the lake and form a harbour; but the lake in this part has much retreated, and left a marshy plain. Outside the walls are the remnants of an ancient aqueduct.[2]

The Church of the Dormition, the principal church of Nicaea, was probably the most important Byzantine cathedral in Asia Minor. It was decorated with very fine mosaics from the 9th century. The church was destroyed in 1922,[3] during the Turkish War of Independence.

Excavations are underway in the Ottoman [kiln]s where the historic ?znik tileware were made. The Hagia Sophia is also undergoing restoration.