We had the pleasure of visiting Crimia, Ukraine recently.

This is the birthplace of my mother. She was born in Gaspra, just about 15 kms from Yalta. I took her along with my sister, to show her Gaspra, as well as Yalta, and the Livadia palace. 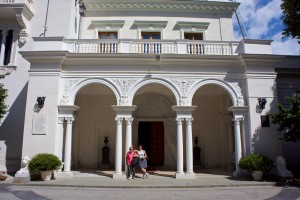 Livadia palace (link to gallery) is just about 15 km. from Yalta. It is the place where the Yalta conference was made between the allies. Stalin, Roosevelt and Churchill, during 4-11 February 1945, to determine the faith of the world war. The meeting was intended mainly to discuss the re-establishment of the nations of war-torn Europe. 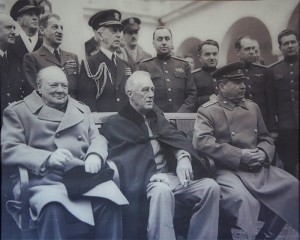 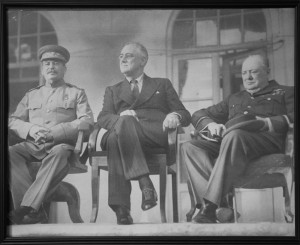 You will also see alot of photos from the conference in the gallery, just a link away from you.

Some photos are from the palace itself, as well as photos from the Yalta conference, and unsurprisingly, from the Tsar family, who built the palace before the 1917 revolution. Knowing the tragic end of the family, the happy pictures of the Tsar family?represents a contrast to the visitors. 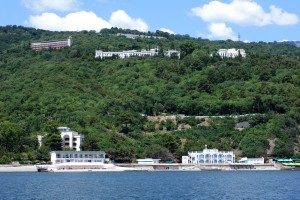 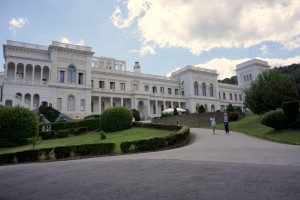 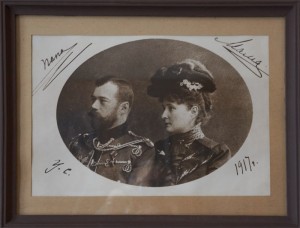 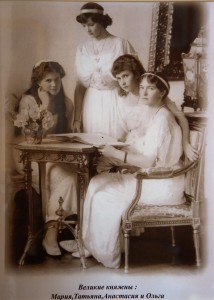 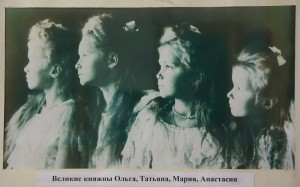 Some additional information about the Livadia Palace follows:

Almost all of the known styles, starting from the Byzantine has been used in this palace. There are even some eastern motives, that you will see in the gallery.

Livadia Palace (Crimean Tatar: Livadiya saray?) was a summer retreat of the last Russian tsar, Nicholas II, and his family in Livadiya, Crimea in southern Ukraine. The Yalta Conference was held there in 1945, when the palace housed the apartments of Franklin Delano Roosevelt and other members of the American delegation. Today the palace houses a museum, but it is sometimes used by the Ukrainian authorities for international summits.

In 1909 Nicholas and his wife travelled to Italy, where they were captivated by Renaissance palaces shown to them by Victor Emmanuel III. Upon their return, they engaged Nikolay Krasnov, Yalta‘s most fashionable architect, responsible for the grand ducal residences in Koreiz, to prepare plans for a brand new imperial palace. The tsar’s diary testifies that the design was much discussed in the imperial family; it was decided that all four facades of the palace should look different. Construction works lasted for seventeen months; the new palace was inaugurated on 11 September 1911. Grand Duchess Olga celebrated her 16th birthday that November at Livadia. After the February Revolution Dowager Empress Marie fled to Livadia before emigrating to Denmark.

During the second World War, a ceremony marking the successful completion of the German Crimean Campaign (1941?1942), with the capture of Sewastopol by the 11th German army under the command General Erich von Manstein, and Manstein’s promotion to the rank of field marshal, was held in the garden of Livadia Palace on July 6, 1942. Participants included officers, noncoms and soldiers who were awarded the German “Ritterkreuz” (Knight’s Cross) and the “Deutsches Kreuz in Gold“( German Cross in Gold).[1]

The palace was once used as a mental institution, and now serves as a museum on the territory of Ukraine. Most of the historical artifacts have been lost, but anything that has been recovered can be seen for a small fee. In August 2007 the palace was recognized as a landmark of a modern history by the Seven Wonders of Ukraine project. Ukrainian pop singer Sofia Rotaru, who celebrated her 60th birthday at the palace in the company of the presidents of Russia, Ukraine and Moldavia – the second such meeting since the Yalta Conference – funded the reconstruction of Livadia Palace in 2008.[2]

The Livadia Palace is built of white Crimean granite in the Neo-Renaissance style. The edifice features an arched portico of Carrara marble, a spacious Arabic patio, an Italian patio, a Florentine tower, ornate Bramantesque windows, a “balcony-belvedere”, and multiple bays with jasper vases. A gallery connects the palace with a neo-Byzantine church of the Exaltation of the Cross, built by Monighetti in 1866.

The palace contains 116 rooms, with interiors furnished in different styles. There are a Pompeian vestibule, an English billiard-room, a Neo-baroque dining room, and a Jacob-style study of maple wood, which elicited particular admiration of Nicholas II.

This entry was posted in Uncategorized and tagged livadia, Tsar, Ukraine, yalta. Bookmark the permalink.