Byzantine Church with mosaics from the 13th century.

Now a museum. Located in Istanbul.

Links to my photo gallery is here.

The Church of St. Savior in Chora (Turkish Kariye Müzesi, Kariye Camii, or Kariye Kilisesi ? the Chora Museum, Mosque or Church) is considered to be one of the most beautiful examples of a Byzantine church. The church is situated in the Edirnekapı district of Istanbul. ?In the 16th century, the church was converted into a mosque , and it became a secularised museum in 1948. The interior of the building is covered with fine mosaics and frescoes. 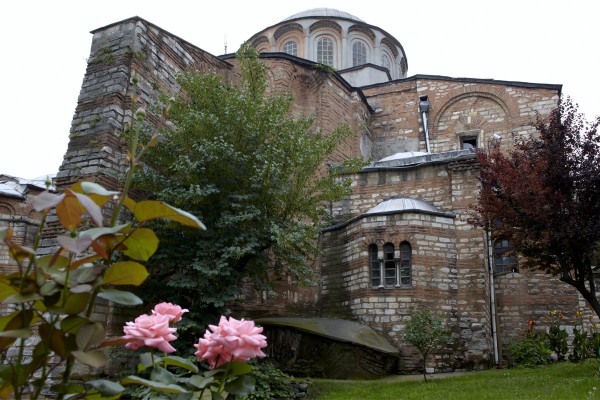 The Chora Church was originally built outside the walls of Constantinople, to the south of the Golden Horn. Literally translated, the church’s full name was the Church of the Holy Saviour in the Country: although “The Church of the Holy Redeemer in the Fields” would be a more natural rendering of the name in English.  The last part of that name, Chora, referring to its location originally outside of the walls, became the shortened name of the church. The original church on this site was built in the early 5th century, and stood outside of the 4th century walls of Constantine the Great. However, when Theodosius II built his formidable land walls in 413?414, the church became incorporated within the city’s defences, but retained the name Chora. The name must have carried symbolic meaning, as the mosaics in the narthex describe Christ as the Land of the Living and Mary, the Mother of Jesus, as the Container of the Uncontainable

The majority of the fabric of the current building dates from 1077?1081, when Maria Dukaina, the mother-in-law of Alexius I Comnenus, rebuilt the Chora Church as an inscribed cross or quincunx: a popular architectural style of the time. Early in the 12th century, the church suffered a partial collapse, perhaps due to an earthquake. The church was rebuilt by Isaac Comnenus, Alexius’s third son. However, it was only after the third phase of building, two centuries after, that the church as it stands today was completed. The powerful Byzantine statesman Theodore Metochites endowed the church with much of its fine mosaics and frescos. Theodore’s impressive decoration of the interior was carried out between 1315 and 1321. The mosaic-work is the finest example of the Palaeologian Renaissance. The artists remain unknown. In 1328, Theodore was sent into exile by the usurper Andronicus III Palaeologus. However, he was allowed to return to the city two years later, and lived out the last two years of his life as a monk in his Chora Church.

During the last siege of Constantinople in 1453, the Icon of the Theotokos Hodegetria, considered the protector of the City, was brought to Chora in order to assist the defenders against the assault of the Ottomans. 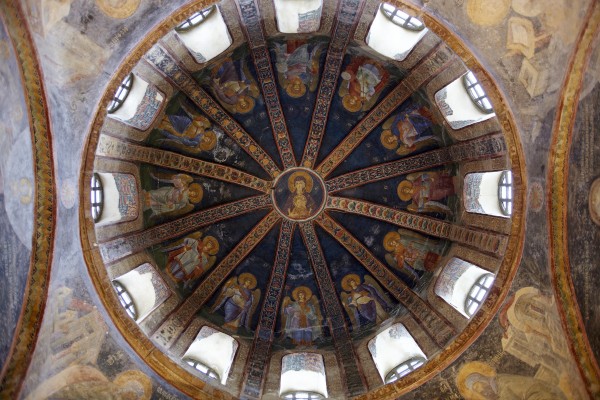 Around fifty years after the fall of the city to the Ottomans, At?k Ali Pa?a, the Grand Vizier of Sultan Bayezid II, ordered the Chora Church to be converted into a mosque ? Kariye Camii. Due to the prohibition against iconic images in Islam, the mosaics and frescoes were covered behind a layer of plaster. This has helped the mosaics to survive the effects of time, but ?frequent earthquakes in the region have taken their toll on the artwork.

In 1948, Thomas Whittemore and Paul A. Underwood, from the Byzantine Institute of America and the Dumbarton Oaks Center for Byzantine Studies, sponsored a programme of restoration. From that time on, the building ceased to be a functioning mosque. In 1958, it was opened to the public as a museum ? Kariye Müzesi. 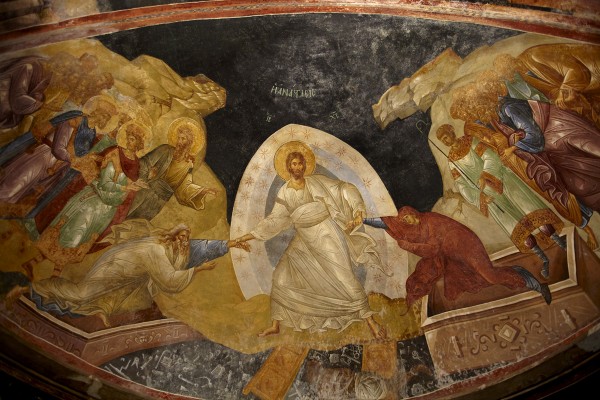 The Chora Church is not as large as some of the other Byzantine churches of Istanbul (it covers 742.5 m?), but what it lacks in size, it makes up for in the beauty of its interior. The building divides into three main areas: the entrance hall or narthex, the main body of the church or naos, and the side chapel or parecclesion. The building has six domes: two in the esonarthex, one in the parecclesion and three in the naos.

The main, west door of the Chora Church opens into the narthex. It divides north-south into the exonarthex and esonarthex.

Mosaic of the journey to Bethlehem

Mosaic of the enrollment for taxation before Zyrenius

The exonarthex (or outer narthex) is the first part of the church that one enters. It is a transverse corridor, 4 m wide and 23 m long, which is partially open on its eastern length into the parallel esonarthex. The southern end of the exonarthex opens out through the esonarthex forming a western ante-chamber to the parecclesion. The mosaics that decorate the exonarthex include:
Joseph’s dream and journey to Bethlehem;
Enrollment for taxation;
Nativity, birth of Christ;
Journey of the Magi;
Inquiry of King Herod;
Flight into Egypt;
Two frescoes of the massacres ordered by King Herod;
Mothers mourning for their children;
Flight of Elizabeth, mother of John the Baptist;
Joseph dreaming, return of the holy family from Egypt to Nazareth;
Christ taken to Jerusalem for the Passover;
John the Baptist bearing witness to Christ;
Miracle;
Three more Miracles.
Jesus Christ;
Virgin and Angels praying. 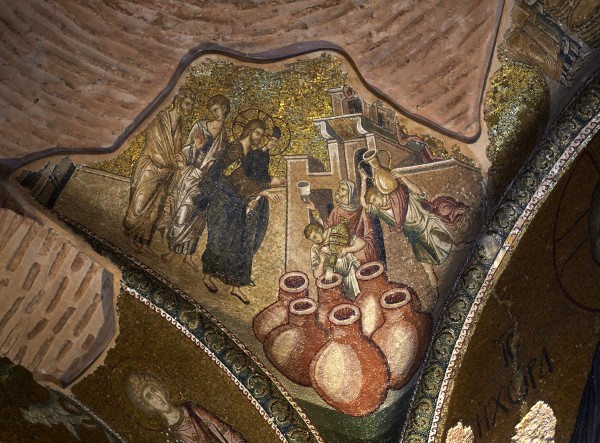 Mosaic of the Koimesis in the Naos

The central doors of the esonarthex lead into the main body of the church, the naos. The largest dome in the church (7.7 m diameter) is above the centre of the naos. Two smaller domes flank the modest apse: the northern dome is over the prothesis, which is linked by short passage to the bema; the southern dome is over the diaconicon, which is reached via the parecclesion.
Koimesis, the Dormition of the Virgin. Before ascending to Heaven, her last sleep. Jesus is holding an infant, symbol of Mary’s soul;
Jesus Christ;
Theodokos, the Virgin Mary with child.

The Anastasis fresco in the parekklesion of the Chora Church.

To the right of the esonarthex, doors open into the side chapel, or parecclesion. The parecclesion was used as a mortuary chapel for family burials and memorials. The second largest dome (4.5 m diameter) in the church graces the centre of the roof of the parecclesion. A small passageway links the parecclesion directly into the naos, and off this passage can be found a small oratory and a storeroom. The parecclesion is covered in frescoes:
Anastasis, the Resurrection. Christ, who had just broken down the gates of hell, is standing in the middle and pulling Adam and Eve out of their tombs. Behind Adam stand John the Baptist, David, and Solomon. Others are righteous kings;
Second coming of Christ, the last judgment. Jesus is enthroned and on both sides the Virgin Mary and John the Baptist (this trio is also called the Deesis);
Virgin and Child;
Heavenly Court of Angels;

This entry was posted in Sites from Turkey and tagged chora, church, istanbul, kariye, museum. Bookmark the permalink.